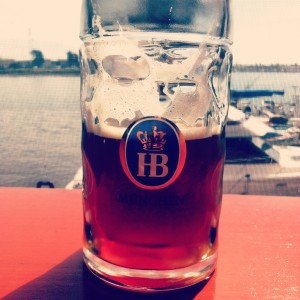 Down the estuary from Jack London square, sharing a parking lot with a fairly random Homewood Suites, is the fantastic Brotzeit Lokal. Brotzeit Lokal is a bar and restaurant featuring hard to find German beer and homemade German food with a low-key and perhaps slightly raucous atmosphere and a beautiful view. I took my parents down here when they were in town, as my dad is obsessed with old German breweries, having a feeling it would be a hit. It was.

They feature 18 taps which rotate continuously with seasonal beers, some local and some German, and a whole slew of bottled beers. If beer isn’t your thing they have a great cider and home-made lemonade which is the best in the city in my opinion. Let’s be honest, in terms of a place to drink beer, it doesn’t really get much better.

And then there’s the food. I had the sausage and sour kraut. The sausage delicious and very flavorful. But the sour kraut is not to be missed. It may even equal my grandmothers…something I never thought possible. So, definitely go check out Brotzeit Lokal for relaxation, good beer, and yummy food.